Tom Kerridge never set out to write a diet book. But after shedding more than 70 kilograms from his ample frame - most of it in the public eye as a presenter on the BBC's Proper Pub Food and Best Ever Dishes - the affable British chef was swamped with so much interest about how he trimmed down that he decided to commit his ideas to paper. 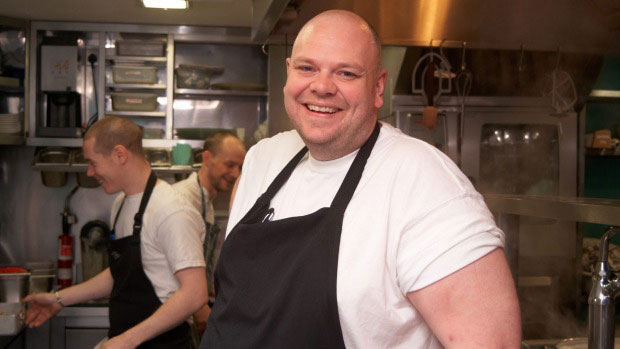 The Michelin-starred chef before embarking on his low-carb plan.

The answers contained in his new cookbook, Tom Kerridge's Dopamine Diet, aren't earth-shatteringly original, as the Michelin-starred chef from Marlow gastropub The Hand and Flowers, is the first to concede. Tom Kerridge ragu.

The recipes are essentially revved-up versions of low-carb cooking, ditching anything sugary or starchy in favour of meat, fish, eggs, nuts, dairy and vegies, with starring roles given over to omelets, mince and broth.

But where other books in the same genre might suggest salads and light lunches, Kerridge conjures up robust satiating fare heavy on seasoning, cream and marinades. Tom Kerridge pizza recipe. His chef technique lets him cram in flavour and texture, he says, and as a busy new father who grew up in a housing estate in the West Country of England, he also has an appreciation for no-fuss family meals.

It's a potato - it couldn't beat you in a running race. It can't read or write. It can't do anything - it's an inanimate object.

"It's about homely great cooking," he says. "It's protein led ... a lot of it is about big flavours, spices and strong tastes."

There are restrictions, of course - no alcohol, a 90-gram limit on carbohydrates per day, and mince meals without the usually obligatory serve of rice or pasta. But even four years after starting his weight-loss plan, Kerridge says he never feels deprived or as if he's missing out.

"If you're somebody who is active, enjoys flavours and food and cooking, it's still a celebration of eating food," he says. "[It's] focussing on what you actually can eat rather than worrying about what you can't and that's the difference."

For Kerridge, the turning point came when his 40th birthday began to loom, and he tipped the scales at nearly 190 kilograms. Working in a business all about good food and drink, he knew calorie counting was never going to work. Likewise anything fussy, repetitive or boring.

He knew low-calorie diets would leave him ravenous, and low-fat would strip his food of flavour. That left low-carb - which sounded doable. He could still eat his steak - maybe even two - as long as he ditched the chips, or swapped them for leafy greens.

So he began to experiment with recipes. Fish and chips became seared tuna, white radish and sesame salad. Eggs on toast became egg atop spinach, sesame and pork. Pizza was reinvented as pepperoni pizza omelet. And spaghetti Bolognese transformed into lamb ragu with zucchini noodles.

"It takes a bit of willpower and it takes commitment but you're not going to feel hungry," he says.

"You have to want to go on the diet, but this one is a lot easier to maintain because you're enjoying it ... and you're not counting calories."

Eating out doesn't have to be a challenge, either. "What you do is order clever, so if you're having Chinese you have the stir-fried vegetables and a piece of steamed fish and no noodles. You just avoid things cooked in batter or sweet sauces. So socially ... your lifestyle doesn't have to change."

What then, of the book's sciency-sounding title? It refers to what Kerridge calls his "dopamine heroes" - beef, chicken, chocolate, fruit, nuts, spices and dairy. Feel-good foods he says are high in a chemical called tyrosine, which helps boost the release of dopamine, a neurotransmitter associated with pleasure and emotional rewards.

In fact, the way Kerridge tells it, it was fun to lose weight.

"I always looked forward to what I was eating," he says. "I'm just trying to lift and drive flavours forwards ... So if a normal recipe had two cloves of recipe in, I was putting in eight."

Kerridge doesn't shy away from sweets and pick-me-ups entirely, though. Sugar replacements such as inulin and erythritol are allowed, as is fruit. "It's an apple, I don't see as cheating … you do crave a sweetness but it's also full of vitamins, it's healthy, it's not lost sugars."

Ultimately, though, resisting the lure of a golden baked spud does require some resolve. The trick that helped his formerly not-so-slender self was, of all things, thinking of a potato.

"In those moments of weakness ... I visualise the face on a potato," he says.

"In any other part of life you wouldn't let it beat you. It's a potato - it couldn't beat you in a running race. It can't read or write. It can't do anything - it's an inanimate object. You can beat this because you have a brain and this is something that's a vegetable. But you have to take it on as a thing rather than the craving you're having."

We have already told in our materials about the world-famous chef Tom Kerridge, who set a goal to lose weight using only healthy diet.